So what is the origin of rocks and history of geology?


As solid as they seem, rocks are as dynamic as the rest of the nature. They just change very slowly.

The oldest rocks formed with the formation of the Planet Earth 4.6 billion years ago.

Through the whole history of geology ever since, rocks have been built, eroded and rebuilt in a process called the rock cycle. 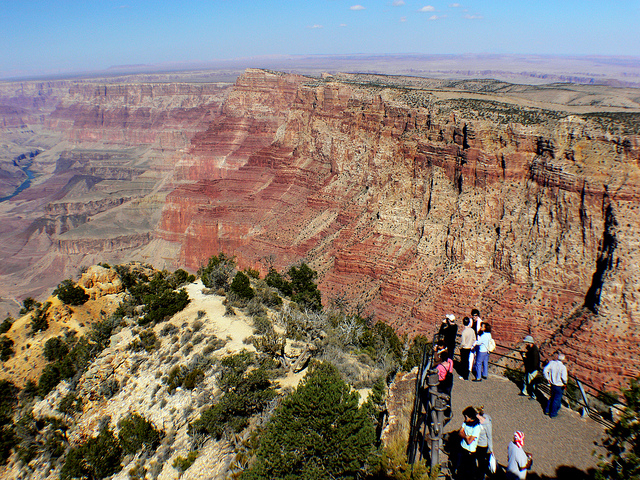 History of geology seen in the field: Grand Canyon by Bernard Spragg. NZ via Flickr.com

Rocks first (it's hard to say "first" because it's a cycle, but I have to start somewhere) form by volcanic activity. As the magma cools under the Earth's surface in magma chambers, intrusive igneous rocks and minerals form (one of the examples is the very common rock granite). As the lava gets out to the surface, it cools, and extrusive igneous rocks such as basalt form.

Through wind and rain activity those rocks erode. The material that is eroded ends up on the ground, and finally often finds its way to waterways. In the bottom of oceans, lakes and rivers, the sedimentary material accumulates and older layers are covered by younger layers.

The older layers are finally buried so deep that they turn into rock under all the pressure from younger layers. This is how sedimentary rocks form.

Some sedimentary rocks end up on the surface, by uplifting, and/or erosion. Others keep getting buried deeper and deeper, where in the Earth's interior temperatures and pressures increase.

It first metamorphoses into a metamorphic rock, by pressures and temperatures - it is streched and compressed but not melted. Some metamorphic rock ends up on the surface by uplifting forces and erosion.

Others can get buried even deeper, where the temperatures are getting so hot that the rock starts melting - it turns into magma melt. Different forces may bring it closer to the surface again, where the temperatures may get so low that it "freezes" (this is still at a temperature of thousands of degrees Celcius) and turns into an intrusive igneous  rock. Or, it may end up exploding in a volcano and freeze on the surface of the earth to an extrusive igneous rock.

And the cycle continues by erosion, burial, uplift and so on.

All the rocks we see at any time on the Earth, are in some stage of that cycle.

Return Home to Collecting Rocks and Minerals from History of Geology