It is a series of metamorphic mineral assemblages that form in a specified range of pressures and temperatures. 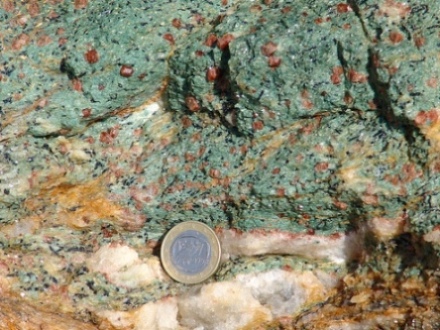 Eclogite facies. By GOC53 via Flickr.com

Those assemblages depended not only on pressures and temperatures, but also the chemical composition of the original rock.

In other words, the same metamorphic rock contains different minerals depending on at which temperatures and pressures it was formed.

And two different rocks don't contain the same minerals just because they formed under the same pressures and temperatures, because the composition of the original rock was different.

But - two separate masses of the same rock, located at different locations, will have the same minerals if they were formed under the same pressures and temperatures.

This observation lead to Eskola's facies:

Return Home to Collecting Rocks and Minerals from Metamorphic Facies