It is an extrusive igneous rock, which formed at so rapid cooling of viscous, felsic lava that mineral crystals didn't manage to form.

Its main component is glass, and most often, no minerals are present.

Occasionally, though, rare quartz and feldspar phenocrysts can be found. 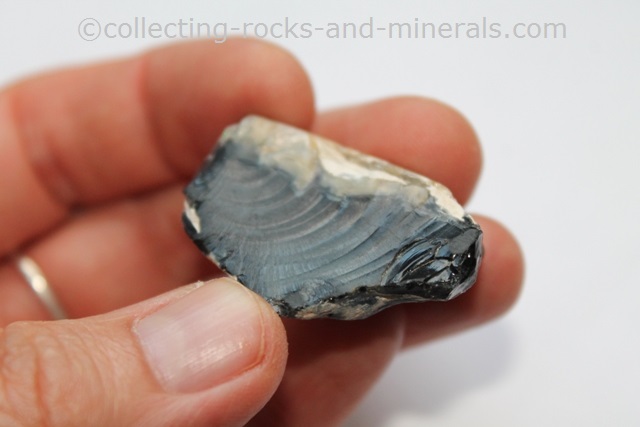 Those have formed underground, before the lava had erupted and obsidian was formed. It also contains tiny amounts of water.

In fact, like with pegmatite and porphyry, the term "obsidian" only refers to its glassy texture.

Theoretically, a rock with any composition can be it. In practice, though, it most often has the composition similar to rhyolite.

Like rhyolite, it can have a flow-banding texture, and it has got a sharp, concoidal fracture.

This is why it has been used to make cutting tools since ancient times.

It is most often black, but can occasionally be reddish or have a white snowflake pattern.

Return Home to Rocks and Minerals from Obsidian Rock