On this page you have the phosphate rock forming minerals.


They are a relatively large group of more than 200 minerals, which tend to be colourful, soft and well crystallised.

Many are secondary minerals. 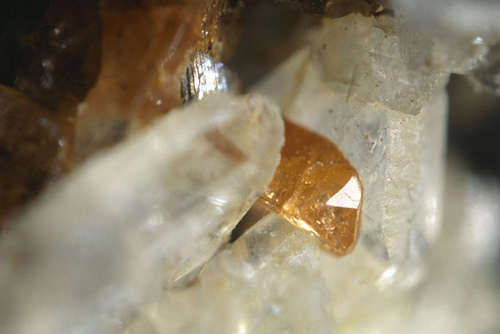 Monazite. By MuseumWales via Flickr.com

Monazite is a group of minerals with the same crystal strucutre but variable chemical composition such as cerium, neodymium and lanthanum monazite. It can form prismatic or tabular crystals; or it can be granular. It can be white, greenish, yellow, pink, reddish or brown. It forms in metamorphic rocks, hydrothermal veins and pegmatites. 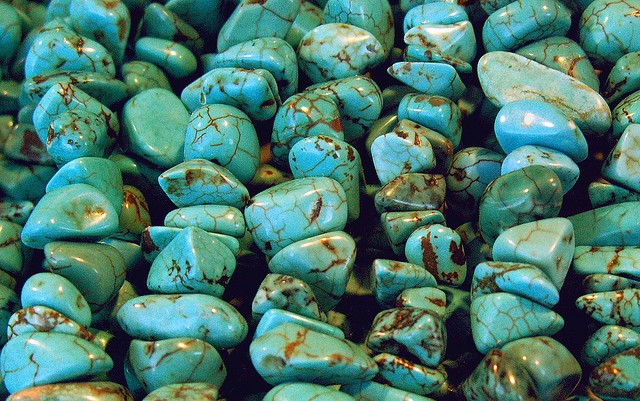 Turqoise gems by cobalt123 via Flickr.com

Turquoise is a beautiful turquoise-blue mineral, which forms small prismatic crystals, but often occurs in granular, nodular, massive, or stalactitic habits. It can also be green or greyish, and if crystals exist they are transparent. It forms in altered, aluminium rich igneous and sedimentary rocks. It has been mined as a gemstone since ancient times. 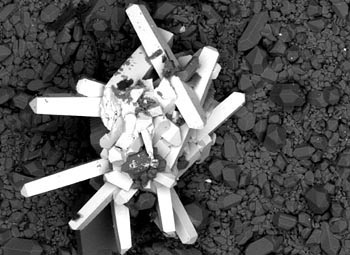 Xenotime is an yttrium phosphate that can form prismatic crytals or occur in glassy habit or rosette shaped aggregates. It can be yellowish or reddish brown, greenish or grey. It forms in igneous rocks and pegmatites, but can also be found in hydrothermal veins and metamorphic rocks such as gneisses, and in detrital material in sediements. 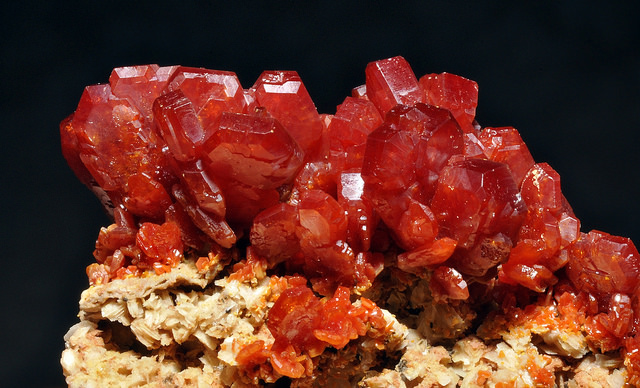 Vanadinite by Gary Parent via Flickr.com

Vanadinite is a lead vanadate chloride and quite a rare mineral. It can form prismatic, hairlike or acicular crystals, which can be hollow. It is red, brown or yellowish in colour. It forms a a secondary mineral in loxidised zones of lead deposits and is often associated with limonite, wulfenite, barite and galena. It is a major ore of wulfenite. 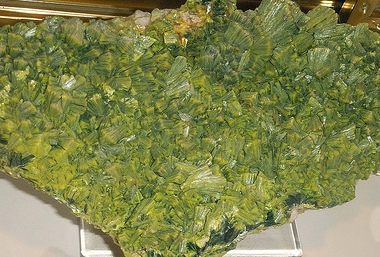 Autunite. By cobalt123 via Flickr.com

Autunite is a calcium phosphate which contains uranium and is radioactive. It can form tabular crystals, or occur as grains, foliated scaly aggregates or serrated crusts. It is yellow or greenish yellow in colour and fluorescences under ultra violet light. It forms as a secondary mineral by the alteration of uranium bearing minerals. 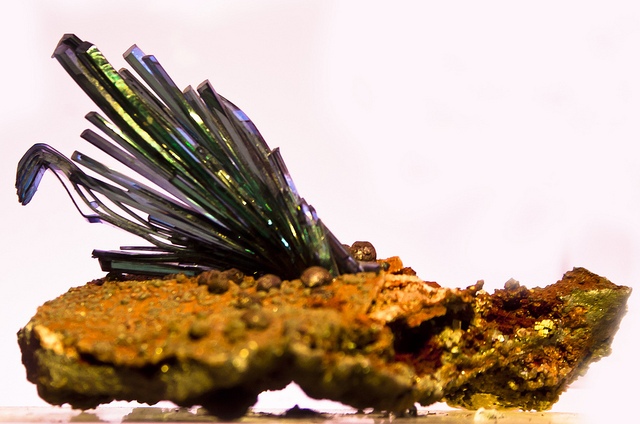 Vivianite by Jake Slagle via Flickr.com

Vivianite is an iron phosphate rock forming mineral, which can form tabular or prismatic crystals, or occur in fibrous or massive habit. It is colourless when fresh, but can be coloured to green, blue and yellow by impurities. It is a widespread mineral and it forms in oxidation zones of iron ore and manganese bearing minerals. 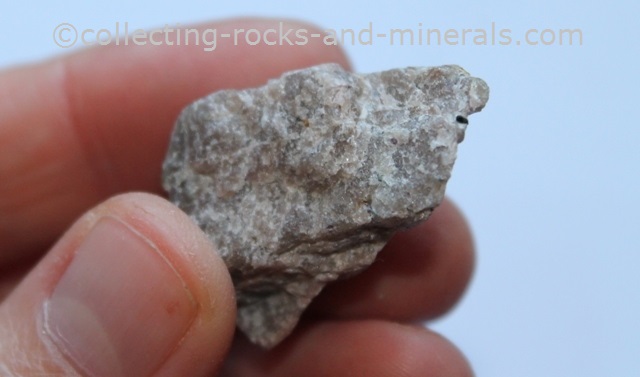 Apatite is a group of calcium phosphate minerals, which have the same crystal structure but various composition (fluor-, chlor-, and hydroxylapatite). It can form tabular or prismatic crystals or can occur in granular, compact or massive habits. It is most often green but can come in other colours. 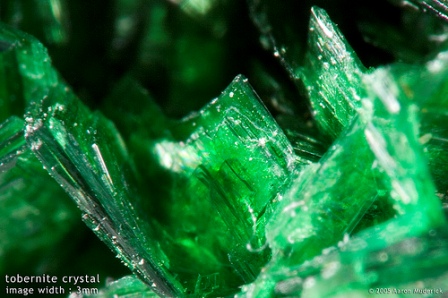 Torbernite is a copper phosphate rock forming mineral. It can form tabular crystals, or lamellar or scaly, foliated, mica-like aggregates. It is green in colour. It forms as a secondary mineral by alteration from uraninite and other uranium bearing minerals, and is consequently radioactive. It is a minor uranium ore. 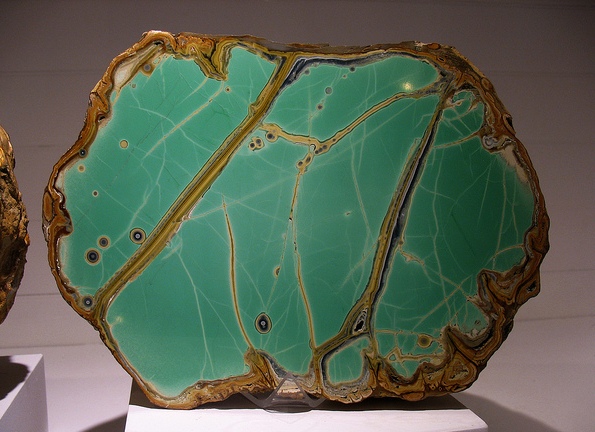 Variscite by Peter Eimon via Flickr.com

Variscite is an aluminium phosphate rock forming mineral. It forms crystals (tabular or prismatic) rarely, and is most often granular, nodular, compact or fine grained massive. It is usually green, but can also be bluish, yellow, purple, red, grey, brown, white or colourless. It forms in marbles and aluminium rich igneous rocks, and is often found with wavellite, apatite and iron oxides. 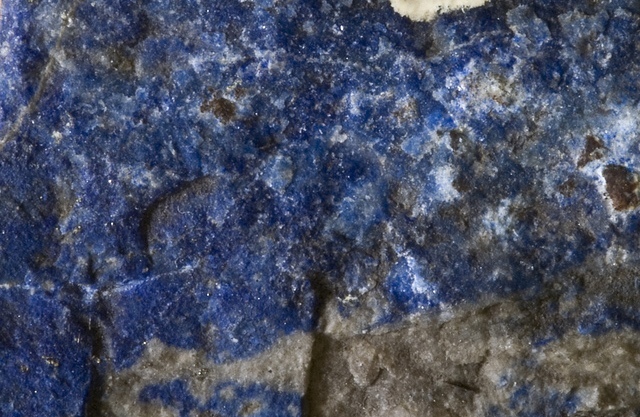 Lazulite is a colourful azure blue mineral that forms quite large, pyramidal or tabular crystals or can be compact, granular or massive. It forms in aluminium rich metamorphic rocks, hydrothermal veins and pegmatites; and is often found in association to quartz, corundum, sillimanite, muscovite, kyanite, garnet, rutile and andalusite. 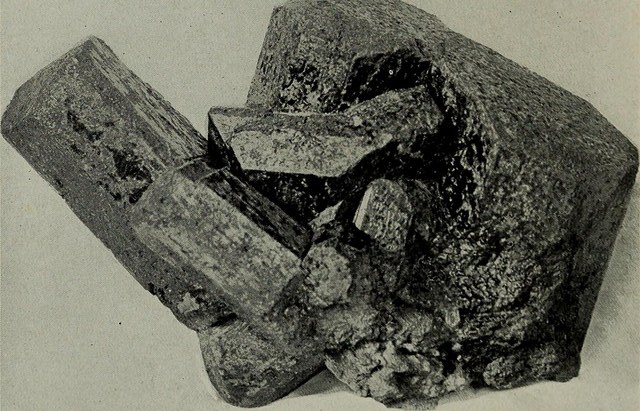 Amblygonite is a lithium phosphate rock forming mineral that can form short prismatic crystals that can be twinned; or occur as massive. It is often white but can also be bluish, greenish, yellowish, pinkish or colourless. It forms in coarse grained igneous rocks such as granites and pegmatites. It is used as a source of phosphorus and lithium. 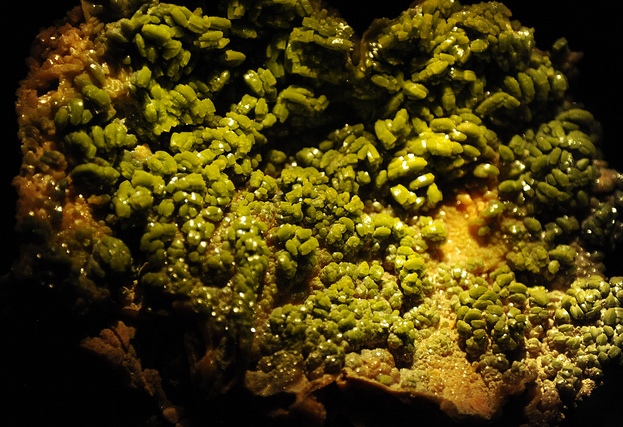 Pyromorphite by Ed Uthman via Flickr.com

Pyromorphite is a lead phosphate chloride, which can form short prismatic crystals, or can be fibrous, botroydal, earthy, granular, reniform or globular. It is often green but can also be yellow, brown, grey, or orange in colour. In forms in the oxidised parts of lead veins, and can be found in association with limonite, galena, vanadinite, smithsonite and cerussite. It is a minor ore of lead. 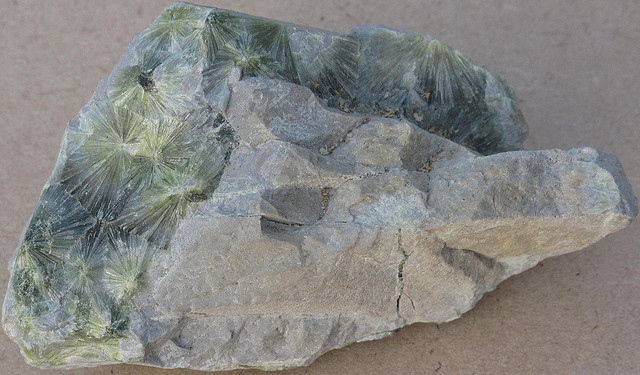 Wavellite is an aluminium phosphate rock forming mineral that can form prismatic crystals;
radiating, acicular aggregates, stalactitic deposits, or crusts. It is white, yellowish white, greenish white or yellowish brown in colour. It forms as a secondary mineral in llow grade metamorphic rocks that are rich in aluminium, limonite and phosphate.

Return Home to Collecting Rocks and Minerals from Phosphate Rock