Phyllite is a foliated metamorphic rock.


Like other foliated metamorphic rocks, it forms when other rock (mudstone, shale) is subjected to heat and pressure.

Like slate and schist, it is a layered type of rock, but unlike slate it is almost glittery (it is said it has phyllitic lustre). 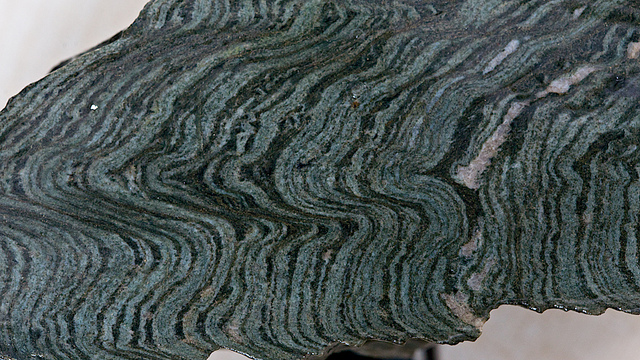 That is thanks to its mineral composition, which includes more mica (created by more pressure) than slate.

Other minerals are quartz, feldspar, graphite and chlorite, as well as smaller amounts of magnetite, pyrite, cordierite, staurolite and tourmaline.

The layers of phyllite are also different - they are stronger together than those in slate (that are well known to break apart very easily).

Also while the layers in slate are flat, in phyllite they are wrinkled.

It is fine grained, however slate is even finer.

Return Home to Collecting Rocks and Minerals from Phyllite