It is the third most common mineral on the Earth (after ice and feldspar) and comes in many different varieties.

And the most common is the transparent rock crystal. 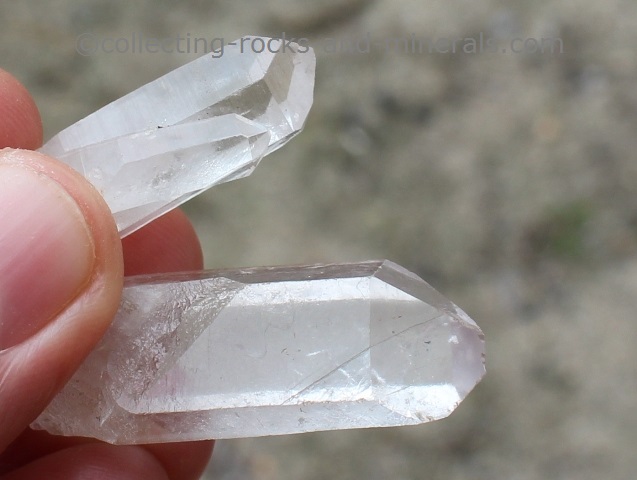 When it forms transparent crystals it is called rock crystal. Quartz is a silicon dioxide, which most often comes in this, colourless and transparent form. It belongs to the group of tectosilicates. The crystals are hexagonal or trigonal and prismatic. The crystals can sometimes be twinned, or just come in a crystal cluster. 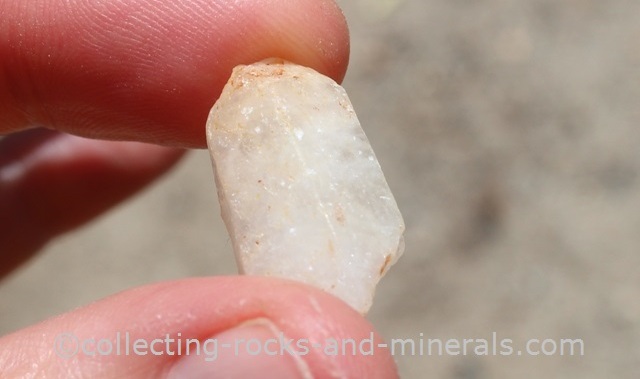 The milky form is white or greyish white. It is transculent to almost opaque, and forms crystals as well as masses, looking exactly like rock crystals in all aspects except colour. This is actually the most common variety of quartz - particularly because this is the typre of quartz in the veins. 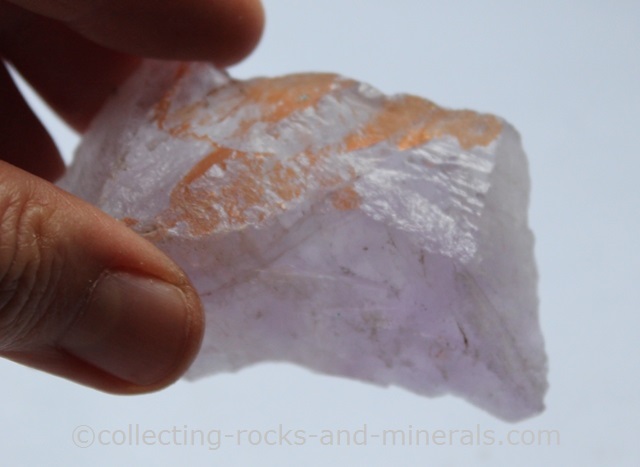 This variety is most often found as massive, and more seldom as crystals, even then the crystals are only small. Small amounts of titanium make it pink. It is often found in pegmatites, sometimes in very large amounts. It's the variety of quartz that is often carved. New Age practitioners also believe that this variety has healing properties. 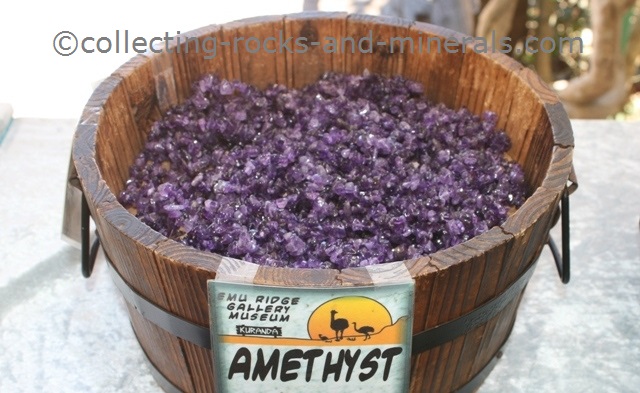 Amethyst is a purple, reddish or violet coloured variety of quartz mineral, which forms crystals and has been a traditional gemstone since old times. It is widely used in jewelry, either as its natural, prismatic crystals, or cut gemstones. It is found where granitic rocks are exposed. Heated amethyst looks like citrine. 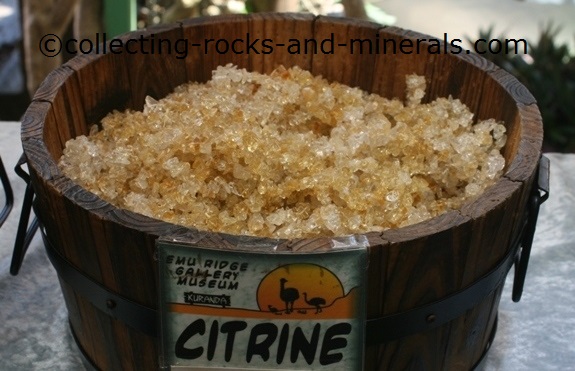 Citrine is a variety that can be any colour between yellow and brown. It is coloured by iron oxides, but can also be created by heating smoky quartz or amethyst, which are much more common than citrine. It is often found in association with the two. 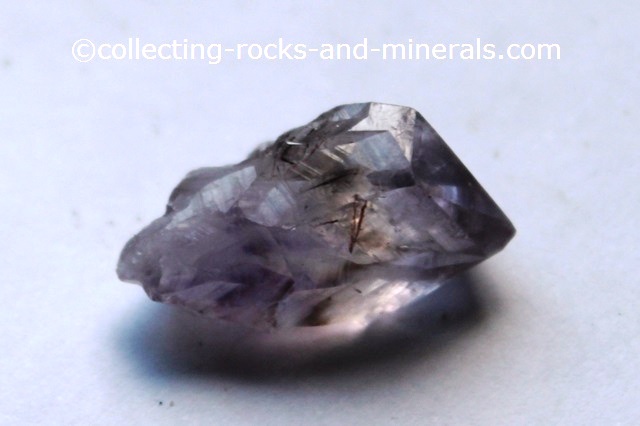 The smoky variety is light or dark brown or any colour in between. The lightest colours can overlap with rock crystals as there is no exact colour boundary between them. It is often found in pegmatites. It is relatively abundant and therefore worth less than some other varieties. 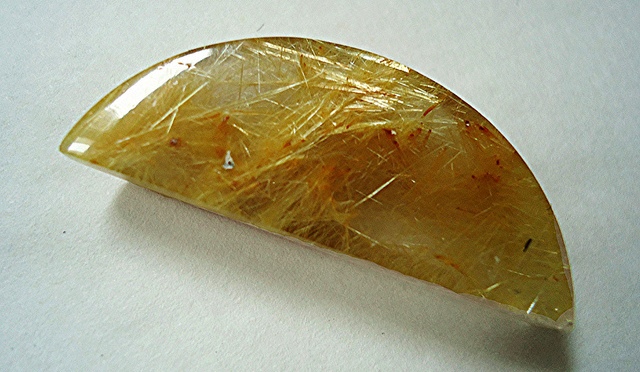 
Rutilated quartz has needle formed crystals of rutile in its matrix. Its matrix is most often transparent while the needles are opaque and if there is a large amount of needles the whole mineral is opaque. It is most often golden in colour but can also be reddish. The needles are randomly orientated. 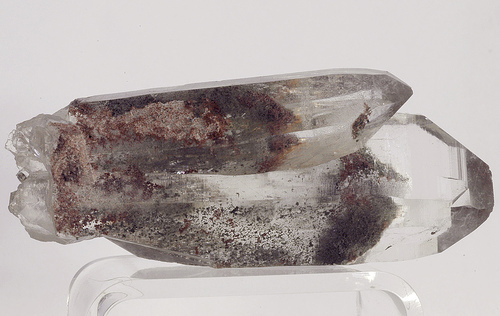 Phantom quartz. By jeff-o-matic via Flickr.com

Phantom quartz mineral has crystals with shadows or "phantoms" from different impurities that have accumulated in the end of a quartz crystal during its growth. Red and brown shadows come from iron minerals, white ones from gas, blue from riebeckite and green from chlorite. 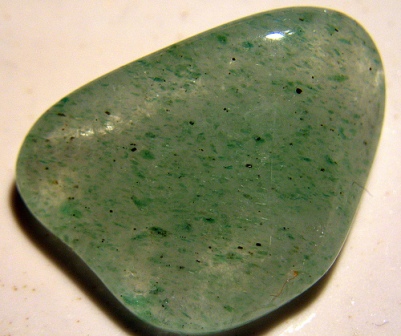 Adventurine. By dee_gee via Flickr.com

Polished on the photo at left, aventurine is a quartz mineral that is always massive in habit. It has got a spangled look because of internal reflections from tiny inclusions from other minerals which are uniformly oriented. The inclusions can be blue, yellow, orange, white, red, brown, or green. Red ones come from hematite. Brown ones come from pyrite. Green ones come from a rare green mica. 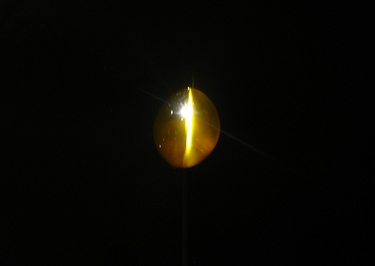 There are two different cat's eye minerals: the less valuable quartz is called Occidental Cat's Eye, while the more valuable chrysoberyl is called Oriental Cat's Eye. Both have a white line across the stone when cut en cabochom style. That effect comes from parallel asbestos fibres in the quartz. 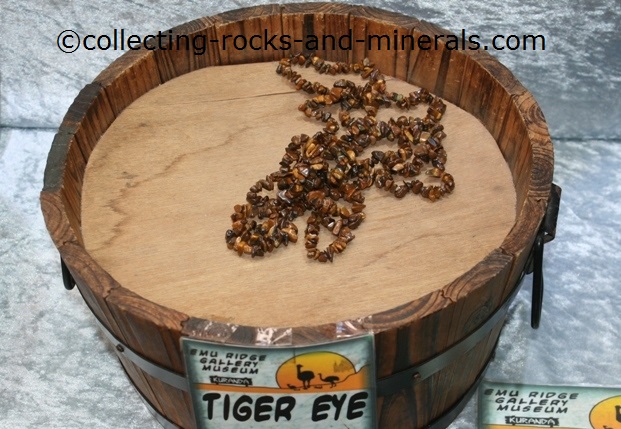 Tiger's Eye or Tiger Eye quartz has a vertical luminescent band called chatoyancy. It is formed when parallel veins of blue asbestos fibers alter to iron oxides and later to silica. It has a rich brownish to yellowish colour and is more opaque than cat's eye. It has got a fibrous habit and vitreous luster.

Return Home to Collecting Rocks and Minerals from Quartz Mineral